My Brilliant Friend (The Neapolitan Novels, #1) by Elena Ferrante 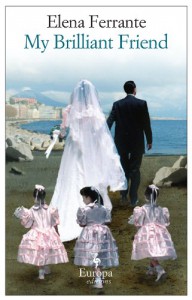 It took way longer than I expected to finish this. First of all the storytelling felt a bit choppy at the beginning. It would start a scene and without finishing it would jump straight to another unrelated scene, and then without finishing that one would switch to another. One moment these two girls are going up a flight of stairs in anticipation of something horrible, then suddenly a teacher bangs her head against a desk and collapses, then suddenly a girl gets hit with a rock by a bunch of boys. Of course the scenes are then revisited and the resolution told in full in various stages of the book, but if it was supposed to make me curious it failed and only discouraged me from continuing. At the end of the first part, the Childhood section, I stopped for a while to concentrate on another novel and didn't pick this up again until weeks (months?) later.

When I returned to it the storytelling does improve; I can even say that it becomes quite engaging. But ultimately I just didn't like the characters that much. I certainly didn't like Lila, who is at best a strange and unsettling child and at worst cruel, malicious and coldhearted. I didn't like the unhealthy relationship between Elena and Lila, and didn't entirely understand whether they are actually friends, frenemies, not so friendly rivals, or something else. Perhaps I sympathized with Elena—I found the story a bit more interesting when it focuses on her and Lila isn't around—but not by much.

Ferrante does a good job, however, of bringing the atmosphere to life, immersing the reader in that poor neighborhood in 1950s Naples riddled with poverty and violence and offering so few choices for women. I think the translator, Ann Goldstein, also deserves credit for making the story flow well in English. The huge list of characters seemed overwhelming at first but they are drawn so well that by the end I was familiar with their different characteristics. And yet I still can't say this was an enjoyable read, nor would I want to read the next installments in this 4-part series. If this book were a friend, brilliant though she may be, I'm afraid I'd prefer to distance myself from her and let our friendship end here.